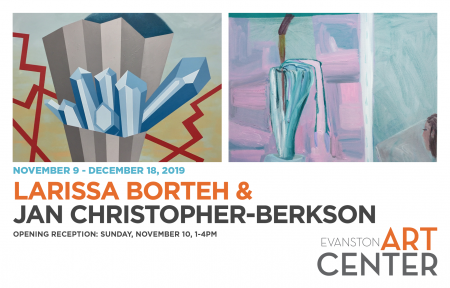 Larissa Borteh was born in Columbus, Ohio.  She received a BFA from the School of Visual Arts in New York City in 2010, and an MFA from the School of the Art Institute of Chicago in 2014.  Recent exhibitions include Hyde Park Art Center, Chicago; Zolla Lieberman Gallery, Chicago; Andrew Rafacz Gallery, Chicago; Minotaur Projects, Los Angeles; Cranbrook Art Museum, Bloomfield Hills; The Union League Club, Chicago; Skylight Gallery, New York; 1708 Gallery, Richmond; and the Visual Arts Gallery, New York.  Larissa has been a recipient of the George and Ann Siegel Fellowship; Leon Levy Foundation Grant; Dave Bown Projects Award.  She has been an artist in residence at the Vermont Studio Center, Johnson, Vermont; The Association of Icelandic Visual Artists (SÍM), Reykjavik, Iceland; Kunstnarhuset Messen, Ålvik, Norway; and was a MacDowell Colony Fellow.  Larissa currently lives and works in Chicago, Illinois where she is an Adjunct Assistant Professor at the School of the Art Institute of Chicago.

Jan Christopher-Berkson has an MFA in Painting and Drawing from The School of the Art Institute of Chicago and a Bachelor of Science degree in Occupational Therapy from the University of Illinois. She has taught at The School of the Art Institute of Chicago in the Painting and Drawing Department and in the Continuing Studies Program. Jan’s work has been recently exhibited at The Salon at The Wing, Chicago, IL, Heaven Gallery, Chicago, IL, Mana Decentralized, Jersey City, New Jersey, Mana Contemporary, Miami, FL, The Clemente, NYC, Highland Park Art Center in Highland Park, IL and The James R. Thompson Center in Chicago; also at The School of The Art Institute of Chicago, including The Sullivan Center and The Betty Rymer Gallery; The Marshall J Gardner Center for the Arts in Gary, IN, and the Lucky Street Gallery in Key West, FL.  Her work can be found in corporate collections including the Kemper Group and JX Nippon Oil and Energy, USA, Inc. and in numerous private collections.  Jan has been awarded artist residencies at Mana Contemporary Artist Exchange in Miami, FL, 2018, OxBow in 2016, Saugatuck, MI and at Ragdale, Lake Forest, IL in 2015 and again in 2016.  She currently serves as Board President for Mitchell Museum of the American Indian in Evanston, IL.

My practice is anchored in the image-making process and invested in generating relationships with and between images.  Using basic materials like canvas, wood and paint, my work often takes on a distinct spatiality as a point of departure to bring into focus sharp edge geometric or architectural shapes, and occasional representational images, interplayed with color.

My works of the past year or so contain the sense that they are creating another existence within their boundaries.  Painting titles allude to current political fear and regret referencing ambiguous collections of shapes that portray fragmentary or enigmatic objects.  Against an atmospheric background, the shapes depict a sense of floating and disequilibrium speaking to an ever-changing landscape.  Whether a work has representational aspects or is purely abstracted, the viewer may attempt to order the imagery into a cogent scene that reflects perceptive reality, or the possibility of fantasy.  In this way it is my goal to create synthetic structures to deal with the everyday sense of chaos and lack of control over real structures that exist in daily life; thus having a place to reorganize and compartmentalize reality.