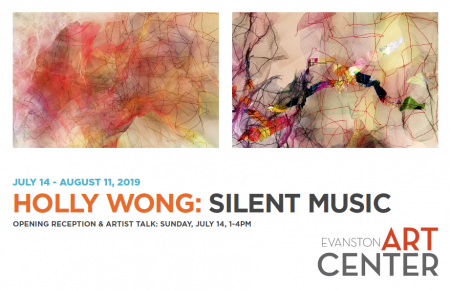 CLICK HERE to view images from the opening reception.

Holly Wong lives and works in San Francisco, California where she received an MFA from the San Francisco Art Institute in New Genres.  Holly creates installations integrating non-traditional approaches with traditional sewing techniques associated with the history of women.  She has received grants from the Barbara Deming Memorial fund, the George Sugarman Foundation, and the Puffin Foundation. She is a Presidential Scholar in the Arts and has had over 50 group exhibitions and 10 solo exhibitions at venues such as the Berkeley Art Museum, the Carving Studio and Sculpture Center in Vermont and the Visual Art Exchange in North Carolina.

Wong creates sculptural installations and photographs that address the subtle and ephemeral nature of psychological states. Using various materials such as tulle and thread, she strives to reconnect in herself what has been fragmented. Much of Wong’s work is constructed with extremely lightweight, layered materials that are fragments that become a visual whole.

I live and work in San Francisco, California and was educated at the San Francisco Art Institute where I graduated with a Master of Fine Arts with a concentration in New Genres.  I create installations integrating non-traditional approaches with more traditional sewing techniques associated with the history of women.  Using various materials such as food cellophane, dichroic film, tulle, organza and thread, I strive to reconnect in myself as well as in the external environment what has been fragmented.  Much of my work is constructed with ephemeral materials that are components which become a visual whole.  My work is a constant process of assembling, deconstructing and then making whole once again.

Recent work has focused on describing the immediacy of needing to be in the present moment in order to avoid further environmental destruction.  Living on the West Coast, I have become deeply aware of the destruction of the lands, traditions and cultures of native peoples and how that has translated ultimately to a throwaway culture that is leading to our collective destruction. I believe that the psychic disconnect in modern times has resulted in a tendency to treat the earth as if it was a disposable resource. Through the action of sewing, I build and construct and then by cutting and resewing, structures reemerge again.  I often use materials that are commonly thought of as disposable or lacking value; my journey as an artist is ultimately to reclaim and to restore value out of what was previously thought of as worthless. The sewing line becomes a type of river, tributary or blood line in my work that has geographical references as the installations stretch broadly across space to make physical reconnections.  In my work, I am trying to physically demonstrate a healing presence that provides a place of refuge for the viewer and ultimately translates towards understanding the need for treating the earth as a sacred refuge in addition to our own bodies.