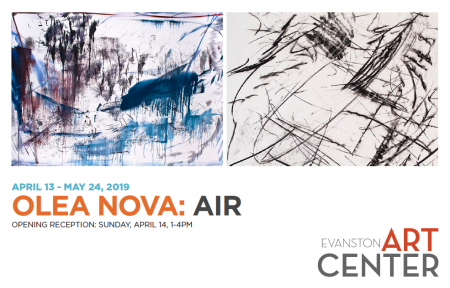 Olea Nova will perform the Theremin accompanied by synthesizers in the First Floor Gallery.

Born in St. Petersburg, Russia, Olea Nova is a visual artist and composer. For Nova, composing paintings and music are two parallel processes where articulation of space is one of the important aspects. She embraces dissonance and polyphony, focuses on vectors of movement and speed of sounds, that are tactile and spacious, through air and time. Nova has shown and performed her work at various venues including the Chicago School of Professional Psychology, the John Michael Kohler Art Center, the University of Wisconsin, the Sullivan Galleries, the Slate Arts and Performance, and the “One Minute Film Festival” at the Art Institute of Chicago.

For Olea Nova composing paintings and music are two parallel processes where articulation of space is one of the important aspects. She embraces dissonance and polyphony, focuses on vectors of movement and speed of sounds, that are tactile and spacious, through air and time. In her compositional processes she relies on the simple idea of arranging various materials within a larger form that is changing over time. There is no narrative content in her work. By exploring her sense of non-objective form Olea Nova dematerializes objects and creates space that is non-referential.

The theme “Air” flows through Olea Nova’s large-scale oil paintings, graphite drawings and model-objects on display at the Evanston Art Center.  Air is flowing within space that moves and expands. Air while visually empty, is filled with wind, electrons, photons, radiation, and sound waves including voice and speech. The feeling of lightness and transparency of air and coalescence of weightless forms influences Olea Nova’s formal inquiries. To dematerialize form Olea Nova works with fluidity and translucency, effects of light and contrasts, asymmetry and dynamism, and strives to eliminate hard-edged forms.

Olea Nova’s intent is for each work to have its own actuality. Work unfolds encompassing contradictions, dissonances and accidents. Resulting dynamic forms are in a state of continuous transformation.  Through form Olea Nova strives to give a sense of contemporaneity. She focuses on the human perception through the interaction of lines, sounds and color, while simultaneously keeping to the improvisational mode of working and leaving the content open for multiple cultural readings.