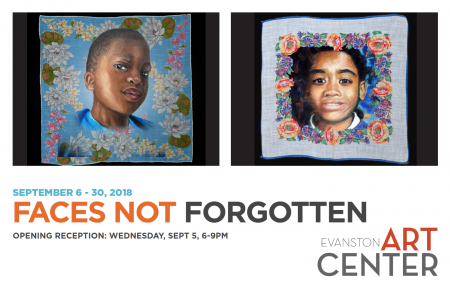 ÔÇ£ShootingsÔÇØ take place daily in the US. We seem to accept them as a general public. Certainly weÔÇÖre outraged when we hear the victims are children and young adults under 21. Then time passes. Can we remember the individual names of those children? Can we recall their faces?

I couldnÔÇÖt. And then I suffered a personal loss to gun violence, A dear friend, Fr. Lorenzo Rosebaugh, OMI, was gunned down. His life had been devoted to the resistance of violence and injustice. He had just officiated at the funerals of two teen victims of gun violence. Over thirty years ago, I had lost my father to suicide by gun.  All of my planned art work at that time came to a halt.

I began the ÔÇ£Faces Project,ÔÇØ painting the portraits of children, 20 and under, who have died as the result of gun violence. An artist friend, Jane Linders, got us organized as I was becoming overwhelmed by the numbers of local victims.  Other passionate artists joined us. We formed a board. And, thanks in part to receiving the 2013 Critical Mass Creative Stimulus grant and the devotion of these artists, we continue to put a Face to the youngest victims of gun violence.

Bill Burton, a young African American artist, gave us a new logo to go with a new name ÔÇ£Faces Not ForgottenÔÇØ, which speaks more directly to the wishes of the families: that their children not be forgotten.

We paint a portrait, the ÔÇ£FaceÔÇØ of each child, which is then donated to the family. A jpeg. image of the original portrait is graphically superimposed over an image of a vintage handkerchief and printed on 16x20ÔÇØ canvas panels with grommets in the corners to create the ÔÇ£FacesÔÇØ. These are tied together with black ribbon in sets of 9, 8 portraits for the 8 children that die each day from gun violence and 1 logo, to create our Faces Not Forgotten quilts.

We work with victimsÔÇÖ support organizations to respectfully contact victimsÔÇÖ families for their permission to create and use these portraits in the fight against gun violence. We have exhibited them at Rutgers Univ. Gallery, N.J. ; Gallery 210, the Univ. of MO-STL ; Blackburn College, IL; Northeastern Univ., The Regional Arts Center, the MO state Capital, Washington DC with the Brady Campaign, The Million Mom march and the MOMs Demand Action and have numerous future exhibits planned throughout the country.

Jessica Meyers, director of CVA, said that one thing families say over and over is that they are afraid that their child will be forgotten. The Faces Not Forgotten Project attempts to keep their memory alive and to offer some small comfort and support to the families.

These children are not just numbers or statistics. Each one of them was a life ended. Each one has a Face.

For more information or to make a donation, email Christine Ilewski at christine.ilewski@gmail.com.