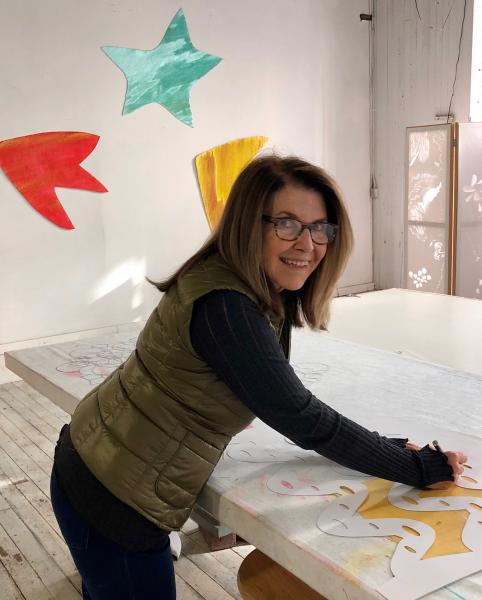 You’ve exhibited at innumerable galleries all across the world. I saw on your website that some of your work is site-specific. How does the location influence your artistic decisions?

SK: Well, it drives me into a spontaneous decision-making process. I normally don’t visit the sites. I bring a series of components that can be arranged in many different ways, and then I am forced into this instantaneous mode of creativity. It’s highly charged. I’m good at logistics, but I have not thought of a way that I can pre-plan how my pieces can be installed in any given space. As a matter of fact, in the last couple of years, I walked into a space that I had seen in a virtual walk-though, but when I walked into that space, I thought, “I can do nothing with this space!” I had driven all my components many miles, but I was ready to turn around. It really is a test of wills. I was able to interpret the space relative to my components in a successful way, and it was a surprise to me too.

Can you explain the mediums you use and your process? How has your use of various mediums evolved over time?

SK: I cut paper, plastic, Mylar, and Tyvek to express water issues. I began this journey of cutting in 2002. There are many different weights to paper, and there a couple of weights I like to cut into. If the paper is too thick, it is not fun to cut. If it’s too thin, that poses problems too. At a point, I wanted to add color to the paper. But most papers become unruly if you add a water-based product to them. I didn’t want to take the time to color the paper with colored pencils. I tried that for one exhibit, and it was really tedious. I was familiar with a product called Tyvek… so I just wanted to see how it took the acrylic ink. It absorbed the ink really nicely, and it was the solution I was looking for. Once I put the Tyvek on the paper and added color to it, the Tyvek absorbs the color and the paper remains flat and obedient.

I’ve cut plastic, I’ve cut tape, but in the last couple years, most of my installations have been Tyvek on paper. And then I was cutting pieces of paper whether or they had Tyvek or not, and two things happened. I had done a pattern and I put that to the side, and then I cut another pattern and I randomly put them one on top of another. And I realized that I could draw again, with one on top of another, and it became really interesting. I like that sense of layering.

I’ve basically got a few different ways of cutting with an Xacto knife. I cut the same way, but in order to form these components, I cut lines, and the lines are kind of organic lines. Sometimes they will be based on archetypal water actions. For example, the vortex shape when water goes past a bridge or rocks and creates a whirlpool. I will use that as my base and kind of riff on that. The lines are organic and they create patterns. Then, I have another way of cutting that is based on a very old way of cutting that is very methodical. It’s actually creating a structural basket weave in paper. It probably predates the Victorian era. That method of cutting actually releases the paper so it can become a vessel, and I’ve really pushed that into 3D designs. So I’ve got that way of cutting and some of my other organic ways of cutting I will do very finely, but I don’t usually work very finely. There are a whole bunch of artists that are amazing cutters that do amazing fine-tuned work, but I usually don’t. I’m not going for that level of refinement.

A lot of your work focuses on water as a thematic element. What draws you to creating art based on water?

SK: The very first piece I ever cut was in response to a show that I wanted to participate in. That was in 2002. Prior to 2002 I was a realist figurative oil painter. I wanted to participate in a memorial show for a friend of mine who had died, and it was a show about rivers. I knew how much the Platte River meant to my friend. She was born and raised in Nebraska, and her family’s farm was on the Platte River. I knew I didn’t want to photograph the river I grew up on in Michigan, and I didn’t want to paint. I’m not a landscape painter. But I knew I could cut a map of the river I grew up on. I thought it was going to be a one-time-only project. Yet in the middle of cutting a slew of water stories filled my brain. It was a surprise because being a realist figurative oil painter, I never worked from my own stories. I was going after realism. I took the photographs that I worked from, but when I was painting, my reality was between that photo and the canvas, and it was only my brush that interrupted that tension. So here are just a ton of water stories that mostly took place on Lake Michigan or a lake right off of Lake Michigan called Spring Lake. I was compelled to follow through on those stories after I finished the map. Everything about cutting fits me and my psyche. As an artist I never though I could be this close, this aligned with a technique. Here I was, cutting away marks, which is more exciting to me than making marks, putting marks on the paper. Cutting away was a very strong, positive feeling that registered inside me. So, I had to pursue this. It kept evolving, and almost two decades have past now, and yet, when I look back at my process of development, I was never at a loss, and I always was discovering something new at a really rapid rate. With my painting, there were times that were dry and bleak.

At the time, it was like, “Do I dare do this?” I had a brand and a reputation with my painting. I certainly could take my painting farther than I had. It was really scary. I risked everything in putting the painting to the side.