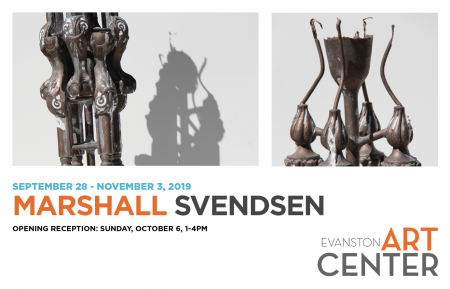 Marshall Svendsen grew up in Connecticut and was passionate about art from a young age, focusing on drawing and ceramics throughout his formative years. He moved to Chicago in 1999 to study at The School of the Art Institute of Chicago, where he received a BFA in 2004 with an emphasis in figurative and abstract sculpture, as well as mold making and metal casting. In 2006, a need to create his own vehicle for artistic expression, combined with a fascination with the craft of metal casting culminated in the founding of True Form Productions, a fine art bronze foundry.

Since its inception, Marshall has been cultivating skills and developing his art practice, utilizing the infrastructure provided by his company. Through True Form Productions, Marshall has worked extensively with the Chicago Fire Department producing over a dozen memorial bronze statues. He has worked with institutions including: The Field Museum; The Lurie ChildrenÔÇÖs Memorial Hospital; The Illinois Historic Preservation Agency; and received a Proclamation from Governor Pat Quinn thanking him for his work restoring Abraham LincolnÔÇÖs Tomb in Springfield IL. He has cast bronze sculpture for several renowned artists including Rashid Johnson, Nick Cave, Preston Jackson, and Virginio Ferrari. His current and ongoing body of work reflects years of meditation on content and aesthetics, as well as a faithful commitment to material studies and the development of techniques.

The focus of this body of work is the combination of hand-sculpted objects referencing memories, molds taken from my environment (pieces of the building I work in, objects that are functional byproducts of my studio practice, things I discover in my travels), and the philosophical examination of the mold making & bronze casting process itself.

Conventionally, in the molding and bronze casting of an object, the goal is to reproduce the thing exactly as it was in a new medium. However, the object is always transformed no matter how identical it may seem and great effort is made to conceal this fact. Over the last 20 years, IÔÇÖve been heavily invested in this effort. Through countless hours in the meditation of craft, IÔÇÖve come to value the forms derived from the functional aspects of process as much as the forms that are the original artistic intent.

Somewhere along the way I began ask myself: why am I erasing evidence of my process? There is so much beauty and intrigue in the act of making. My practice now allows my process to speak truth and imbue my sculptures with an essential layer of narrative. I contemplate the inlets and venting directing the flow of molten metal to fill a void, these flow dynamics can speak toward the conceptual structure of an object as well as its physical shape. By leaving these systems intact and on display, the viewer is encouraged to imagine creation itself in conjunction with the original artifacts. By allowing the original concepts and materials to converse, ultimately they tell me something I did not know.