Our EAC Interns spoke with Holly Wong, a visual artist from San Francisco, as she installed her newest exhibition Silent Music. This exhibition is on display in the EAC Second Floor Gallery and Atrium with an opening reception on Sunday, July 14 from 1-4pm.

What inspired you to use this particular medium for your work?

I had been working in ephemeral materials for a while. I think that I originally started using vegetable netting, which is what you use when you buy oranges​—​produce netting​—​and the produce netting has a bright, bright strength of color but it has a lot of physicality in it; it’s more concrete and I was looking for something that was more ephemeral. I originally started pinning the vegetable netting to these long sheets of tulle so I could suspend them, but then I realized I was more interested in the tulle itself. I was originally trained as a painter, a painter and draftsman, so I used these threads as a form of drawing lines. So when people think of drawing a lot of times they’re thinking of pencil and paper, but I also, as a young woman​—​my mother would sew all the time​—​and I would see the sewing line as a type of drawing line that connects things through space. So, with the tulle, I could see that the line was suspended. At some point ​when I got the opportunity to be at the Evanston Art Center, the first thing that struck me was the windows. There was this unusually large window in the space and I felt like I wanted to activate that space​.

Tulle held up to light is completely transparent, and I really wanted to have some color so I used a type of cellophane, it’s really a type of dichroic film that’s normally used to cover windows, and I basically created these collages of dichroic film, and there’s vinyl tablecloth and I also would xerox patterns from fashion magazines onto overhead plastic, you know, when you’re in school and they have the overhead plastic. So, I run it through the copier and I can xerox these patterns and then I cut them into strips that I then sew into the network of film that I can then suspend into these modules.

These pieces are very much like bloodlines or waterways. My work at this point has somewhat of an environmental undercurrent, because it’s very much about the immediacy of the experience and trying to reconnect with the earth. I think these pieces with the tulle are more about bringing things to an ephemeral presence, getting in touch with yourself, starting to feel what is in your heart so that you can have a more authentic response to the earth. ​These are assemblages, which are sort of a combination of things; they are the film but instead of being attached to the cellophane, they are sewn to the tulle. So, when they’re on the wall, they have their own shadowplay. So these are gonna be a type of wall drawing because again taking things outside the context of the rectangle. ​None of these works are framed because it’s really about not trapping the things in a​—​well, there’s nothing wrong with having framed work​—​and there are some works that I have which are framed, but I feel like I don’t want to be defined by that, so that’s kind of, that’s my response to this space, which is site-specific. So all this work was created for this environment.

What does this particular work mean to you?

There was an environmentalist, a woman who died of cancer in the 1960’s named Rachel Carson, and she wrote a book called Silent Spring. So, much of the titles in this exhibit, Silent Music​, are very much an homage to her in the sense​—​that it’s really about that returning to an awareness of the earth and so that silent memory of her. The long piece on the wall is, so my married name is Wong, and this piece is a dedication to my husband. In Cantonese, you would say, to describe thunder, the translation is grandfather dragon. A lot of words in Cantonese are not really so much like thunder but like the meaning of thunder. So this is a dedication to him on his birthday; so I call it ​Grandfather Dragon​ and some of my work is influenced a lot from the landscapes of Chinese painting because there’s way in which, you know in Western Painting you know it’s like “I’m gonna paint this thing and we’re gonna paint this thing over here,” and it’s really about the absence as the same time as the presence.

Is there anything else you would like viewers to know or keep in mind when viewing your artwork?

I would say that it’s really about, however they relate to the work, that’s okay with me. I see my work as, you’re not supposed to think this or that, it’s more about if you can have an experience in your body​, ideally I hope it gives them a feeling of peace, of comfort, but I’m also totally open to other ramifications of that. ​I also hope that the use of sewing inspires other women to feel empowered to use sewing as a legitimate art form, it’s something that has largely been marginalized in our gender as a marginal art, but it’s just another way of making a mark, is how I look at it. 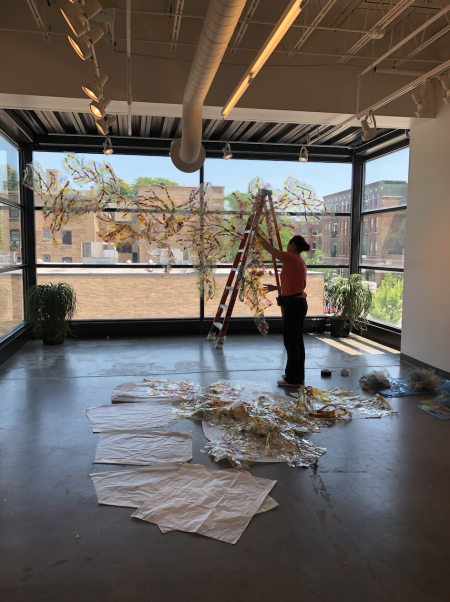