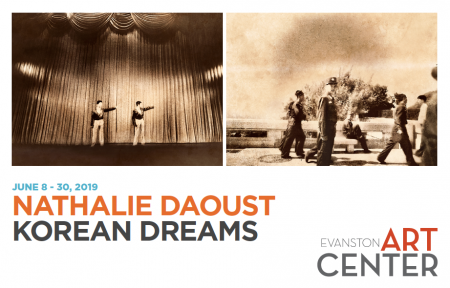 Photographer Nathalie DaoustÔÇÖs newest project, Korean Dreams, is a complex series that probes the mysterious world of North Korea. Her images reveal a country that seems to exist outside of time, as a carefully choreographed mirage. Daoust has spent much of her career exploring the chimeric world of fantasy: the hidden desires and urges that compel people to dream, to dress up, to move beyond the bounds of convention. With Korean Dreams she is exploring this escapist impulse not as an individual choice, but as a way of life forced upon an entire nation.

Shrouded by its fanatical isolationism, most foreigners associate North Korea only with the hallmarks of its repressive regime ÔÇô kidnapping, torture and forced labour camps.  Tourist experiences are carefully crafted to countermand these impressions.  Accompanied by guides at all times, and adhering to the rigid, pre-approved travel program, visitors get a highly selective view of the country as they are paraded past cultural landmarks such as theatres, schools and music halls, meant to create the illusion of a perfect society.

The difficulty of reconciling systemic violence and repression with this shiny world led Daoust to focus on the liminal spaces that exist on the edge of the ÔÇÿtourist zone.ÔÇÖ  By shooting furtively while traveling between destinations she was able to capture an alternate narrative.  Guided by the notion that North Koreans are residing in a ÔÇ£dream-state,ÔÇØ where truth is not lived but imposed by those in power, her anonymous forms wander ghostlike through the landscape. From civilians bicycling against an urban backdrop, to military personnel marching stridently in line and schoolchildren staring pensively out of the frame, these figures seem to exist suspended in an ambiguous, timeless dimension.  Playing with the line between fiction and reality, Daoust exposes an indeterminate space where ÔÇÿtruthÔÇÖ and ÔÇÿliesÔÇÖ are interchangeable.

Her multi-step development process is integral to the interplay between fiction and reality, as she uses the darkroom to reconstruct a forgotten past and an unknown present. Daoust's images have been obscured during the photographic process; the systematic break down of the original negative film has produced a series of final images that appear unclear, indistinct and somewhat ghostlike. As the layers of film are removed, a sense of detachment between the photographer and her subjects is revealed. Daoust's darkroom method also mimics the way information is transferred in North Korea - it is stifled until the truth becomes 'lost' in the process. The resultant pictures speak to North Korean society, of missing information and truth concealed.