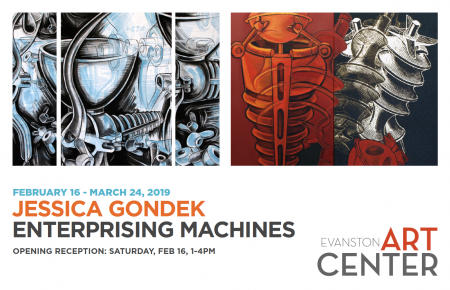 Jessica Gondek was born in Urbana, Illinois in 1969.  She is an artist/teacher living in the Chicago area. Ms. Gondek received her M.F.A. from Washington University in St. Louis in 1992, and her B.F.A. from the School of the Art Institute of Chicago in 1990.

Ms. Gondek has received a number of prestigious awards and residencies recognizing her creative work over the years. Notable is a Pollock-Krasner Foundation Artist Grant (2002), a Graham Foundation for Advanced Studies in the Fine Arts Grant (1999), and a Mid-America Arts Alliance National Endowment for the Arts Grant (1994). Ms. Gondek has been recognized with a number of international artist residency awards. She has been an artist in residence at the Can Serrat International Art Center in Spain (2008), and at the Frans Masereel Center in Belgium (2006-2000). Her selection for these awards is testimony to the significance of her work.

Jessica GondekÔÇÖs work is widely exhibited and has her work is represented in many public collections. Her work is in the collections of the New York Public Library, Kresge Art Museum, Spencer Museum of Art, Butler Institute of American Art, Purdue University Galleries, Washington Jefferson College, Lincoln Bank and Insurance Co, Loyola Museum of Art, the Frans Masereel Center, and the Royal Museum of Fine Arts Antwerp.

Jessica Gondek is active in several womenÔÇÖs collective galleries.  She is an affilate gallery member of ARC Gallery and Educational Foundation.  She has shown at Woman Made Gallery in Chicago, Ceres Gallery in New York, and A.I.R Gallery in Brooklyn. She has been invited to show in a Nevertheless She Persisisted: Women of Courage, Tenacity, and Strenght at the Koehnline Museum of Art on display at Oakton Communicty College fall 2018.

The primary focus of my work is abstract stemming from an interest in technology, geometry, machine aesthetics, architecture, and nature.  My work explores a dichotomous relationship between the hand and the machine that has evolved over time. This creative journey has taken me from work engaged in 3D modeling to create forms and compositions to recent explorations of gendered domestic machines from the early part of the twentieth century referencing trade catalogues and actual utilitarian objects.  These works hold in common a marriage of both traditional media and digitally mediated computer approaches intrinsic to the development of the images. The mechanical forms within these compositions are simultaneously transformed asserting an animated physical presence and internal narrative.

My aesthetic concerns can be traced back to several art historical references.  Some of these paradigms can be found in Da VinciÔÇÖs inventions and war machines, PiranesiÔÇÖs whimsical and ominous architectural spaces, the FuturistÔÇÖs works celebrating technology, and the Pre-Dada works of Duchamp and Picabia that take a more uncertain view on technology are yet another influence on my work.   I share in common with contemporary artistÔÇÖs such as Willie Cole and the late Illinois artist Ellen Lanyon an interest in machines and transformation that results in new machines that take on anthropomorphic qualites and connect to the human condition.

My creative process often incorporates the application of current technology with the intent of using both hand and mechanical approaches to develop my work. I build compositions on the Apple Computer platform.  I use a range of programs to create images; 3-D modeling software has direct engineering applications and allows me to construct images in a manner that brings me to a sculptural understanding of the forms I create on the desktop. Photoshop subequently allows me to investigate appropriation, tranparency, and layering, and the manipulation of imagry.

My recent work endeavors to blur the line of distinction between the hand and machine. This ongoing series is entitled, Enterprising Machines; these works are comprised of charcoal and pastel drawings on paper developed on top of digital print substrates, as well as oil and digital print on canvas.

The forms I explore are inspired by domestic utilitarian objects as well as vintage trade catalogues.  I have researched several sources including a 1902 publication, entitled ÔÇ£The Enterprising Housekeeper Catalogue and Recipe BookÔÇØ  from the Enterprising Machine Company, and a 1900 publication ÔÇ£ Machine Tools.ÔÇØ, from Pratt and Whitney Company.  Digital manipulations from vintage advertisements for fashionable consumer gadgets of the past era are the foundation that launches a modification of context for these works. The digitally printed elements are generated often in the cyan color to recall blueprints or plans that create a base for the drawings.  The drawing medium allows for both transparency and mutability between layers of information. The resulting images are machines that wield their own power.