DESMOND BEACH: COLOR ME THIS 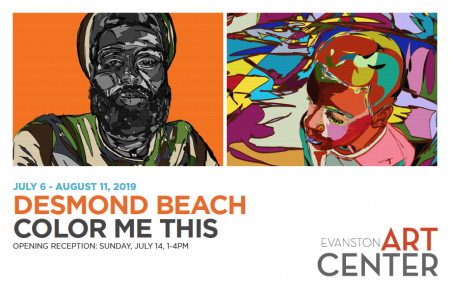 CLICK HERE to view images from the opening reception.

Desmond Beach is a Washington, DC based artist and educator. He earned his MFA from the Maryland Institute College of Art's Rinehart School of Sculpture as well as his BFA from MICA. He has been a Visiting Lecturer/ Artist at institutions such as Coppin State University and Howard County Community College. Desmond has been a Summer Fellow at the Fine Arts Work Center in Provincetown, MA, Artist-in-Residence at the Women Housing Correlation in Baltimore, MD, Summer Fellow at Skidmore College, and Artist-in-Residence at Pyramid Atlantic in Silver Spring, MD. He was MICA’s 2004 Joan Mitchell MFA Award Nominee.

Desmond is an interdisciplinary artist born in Baltimore, Maryland. He is a project artist, meaning that his work takes its point of departure from specific problems or tragedies. Among his most important works so far are his Color Me This, set of mugshot drawings, This Is America, photos of black men, and Portraits of Insurrection, embroideries which fuse images from the Baltimore Uprising with historical images of black men being lynched, and his performance piece Strange Fruit, where hangs himself from a tree that he wears on his head. Desmond finds inspiration for his work from his growing up in Baltimore during the 80s and 90s and his lived experience as a black man.

Desmond Beach’s work is also about honoring his immediate ancestors and those of the African Diaspora. He creates sacred spaces for their spirits to rest in. He is also interested in sharing the introspective moments of everyday life with viewers. Desmond’s work explores the internal dialogue and duality in the relationship that people have with one another, as well as creating work that comments on the social stereotypes surrounding African-American men. Another purpose of his work is to foster a sense of empathy within his audience, create a connection with those previously thought of as "the other," and to build a sense of community between even the most dissimilar human beings. He makes connections with the viewer through a wide range of mediums, including sculpture, mask and headdress, fiber arts, installations, performance, painting, drawing, and mixed media. He believes that his work as an artist is a calling.

The African tradition of storytelling is a common thread that's stitched throughout my work. Honoring my immediate ancestors and those of the African Diaspora is an important focus. Performance art aids me in creating sacred spaces in which the ancestors' spirits may rest. Taking that which is horrific and transforming it into beauty is my highest intention. My work is based on current and historic events surrounding the African-American experience.

Imagery of blacks in the Americas during the middle passage and their portrayal in today's mainstream media is where I gain inspiration. My work also comments on the social stereotypes surrounding black people. In the work, I remix, retell, and reexamine the black experience. The work provides a platform where the stories of the nameless are illuminated.

The work is created from a wide range of media. Performance, sculpture, digital, installation, fiber art, and photography are where the work finds form. My work breaks down the historic barriers between cultural elitism and the common good. The deliberateness of the work is to reclaim and retell the black experience allowing African-American people a more favorable and accurate depiction.